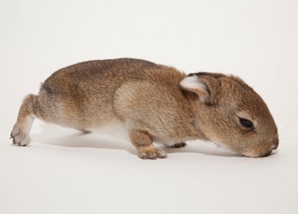 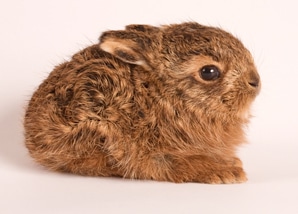 Rabbits will kick with their back legs but have very weak back bones, so you should always take particular care to support both ends of the animal. Once you have established that a rabbit is in need of assistance, carefully pick it up and place it in a cardboard box with a towel and some direct heat to help counter shock.

Hares must be handled in the same way as rabbits but due to their highly stressful nature should only receive the minimum amout of handling.

Wild Rabbits are small mammals which are found in several parts of the world including Europe.  The European rabbit was introduced to Britain by the Normans in the 12th Century.  The male is called a buck and the female is a doe; a young rabbit is a kitten or kit. The oldest rabbit on record lived 18 years.

The European Hare, also known as brown hare is a species of hare native to Europe and Western Asia.  It is a mammal adapted to temperate, open country. It is related to and looks very similar to the European rabbit. Hares can live for as long as twelve years.

The Wild Rabbit is listed as Near Threatened on the IUCN red list as the population is declining due to disease, habitat loss and human-induced mortality. The Brown Hare on the other hand is listed as Least Concern but is a priority species under the UK Biodiversity Action Plan.

Wild Rabbits have greyish-brown fur with a characteristic white flash on the underside of their tail. Adult rabbits weigh around 1.2 to 2 kilograms. They can be 30-40 cm long, making them smaller than most domestic rabbits. They can live for up to 9 years, but in the wild it may be as short as one year.

The most obvious difference between rabbits and hares is how their kits are born. Rabbits are altricial, having young that are born blind and hairless. In contrast, hares are precocial, born with hair and good vision. Hares are generally larger than rabbits, with longer ears, larger and longer hind legs and have black markings on their fur. Hares are very fast-moving animals and are able to run at speeds of up to 56 km/h (35 mph).

The mountain hare is a large species, though it is slightly smaller than the European hare. It grows to a length of 45–65 cm and weighs around 2–5.3 kilograms, females being slightly heavier than males.

Rabbit habitats include meadows, woods, forests, grasslands, deserts and wetlands. They live in family groups, and the best known species, the European Rabbit lives in underground burrows or rabbit holes. A group of burrows is called a warren. They are often seen sitting on grass verges, by roadsides, at dawn and dusk, where there is plenty of grass and few disturbances. They may also be seen out during the day if they are in an undisturbed location.

Hares primarily live in open fields with scattered brush for shelter. They live in simple nests above the ground rather than in a burrow and usually do not live in groups. They are seen less frequently where foxes are abundant or where there are many buzzards.

Rabbits are herbivores that feed by grazing on grass and leafy weeds. They graze heavily and rapidly for roughly the first half hour of a grazing period (usually in the late afternoon), followed by about half an hour of more selective feeding.

European hares are herbivorous. During the summer, they eat grasses, herbs and field crops. Their preference is for wild grasses and weeds but they have taken to feeding on crops. During the winter, they eat herbage, twigs, buds and the bark of shrubs and young fruit trees. They have been known to eat their own green, pellet faeces to recover proteins and vitamins.

The breeding season for rabbits begins in Mid-February and can continue through to late summer. Famous for their reproductive abilities rabbits have a 30 day gestation period and can have several litters a year. Typically a female will have between four and eight babies.

A young rabbit is called a “kit”. They are born blind and furless and they are totally dependant on their mother. When they are very young the baby will only leave their nest if there is a problem. At two weeks of age the young rabbits begin to eat vegetation, at four to five weeks old they feed alongside their mother.

A young hare is called a leveret (up to one year of age). They are born with their eyes open, and are left alone in the day, laying in place, in forms to avoid attracting predators. The mother returns at sunset and the leverets gather around her to suckle. An individual female hare may have three litters in a year. The gestation period is 41 to 42 days. The young weigh about 100 grams (3.5 oz) at birth.

We regularly treat rabbits that have been injured by a car or another vehicle.  If you come across an injured rabbit and can transport it to the hospital we can then give it our immediate medical attention to increase its chance of survival.

A rabbit showing swollen infected eyes can indicate that it is suffering from myxomatosis, a viral infection that only infects rabbits and is transferred by fleas. The main systems of myxomatosis are infected eyes, swelling and respiratory infection. Although the virus itself cannot be cured these symptoms can be treated and if helped through the incubation period of the disease the animal can survive.

Rabbits need all four legs to be in good working order as running is its natural defence. Leg fractures need to be examined by a wildlife rescue centre so that they can be stabilised as soon as possible. If a rabbit is observed dragging both hind legs, this could indicate a spinal or pelvic injury. In this instance, the rabbit should be handled very carefully, with its whole body supported (pref with a board) and taken to a Wildlife hospital immediately where x- rays can determine the extent of the injury.

Caught in a Snare or Fence

Rabbits caught this way should not be immediately released, even if there are no visible wounds as pressure necrosis can take up to a week to develop.

Hares are sometimes bought into us with injuries caused by dogs. Please keep your dog under control at all times as hares are very highly stressed and the shock could actually kill them.

Young hares (Leverets) are sometimes seen on their own in open fields and are bought into us in the belief that they have been orphaned, when in fact the mother may just be a short distance away.