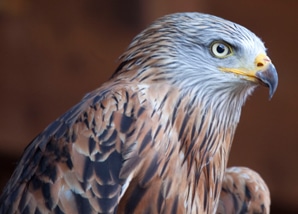 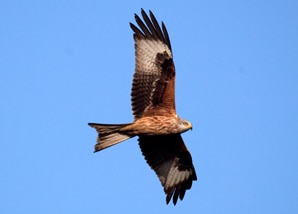 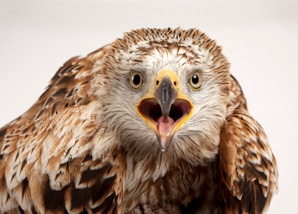 Red Kites have a very sharp, hooked beak which is designed for tearing meat, they also have long sharp talons which can cause a nasty injury if handled without protection. Under the circumstances Red Kites should only be handled using gauntlets or strong welding gloves, holding round the middle and holding the wings folded against the body, keeping the bird held away from you.

One of 3 or 4 species of Kites (classification is under revision) including the Black Kite and Yellow-billed Kite.

Near Threatened. Part of one of the longest running conservation programmes to reintroduce Red Kites back into England after their numbers plummeted. In the 16th and 17th Centuries, Red Kites were one of the most common birds of prey in England and yet by the 19th Century the entire population had been wiped out as they were considered a threat to livestock. However between 1989 and 1994 a total of 93 kite chicks from Spain were released into the Chiltern Hills as part of a reintroduction programme. The first pair bred successfully in 1991 and there are now a over 200 breeding pairs in the Chilterns and from this foundation new populations are being established across the country.

The Red Kite is an elegant medium to large bird of prey which belongs to a family called Accipitridae. It is easily recognised by its distinctive fork tail. The females are usually larger and heavier than the males but the gender can only be determined by a blood test. Red Kites can weigh between 800 and 1.3kg and are between 24 – 26 inches long with a wingspan of approximately 5 feet. In terms of it’s colouring the Red Kite has a russet body with a grey and white head, it’s wings are red with white patches on the underneath and its tail is grey, white tipped with black. Its voice is a mew-like “weoo-weoo-weoo” which is rapidly repeated. Typically red Kites live for about 10 years in the wild.

Found across most of Europe and North-west Africa.

Red Kites are scavengers and prefer to eat dead animals, road kill. They have been seen to take smaller, softer animals such as mice, voles, rabbits, crows and pigeons but they are fairly weak hunters in comparison to say a buzzard. They also eat invertebrates such as beetles and earth worms, especially in Spring. They are also opportunists often attempting to steal from each other, particularly during breeding season.

Red Kites become a lot less sociable during breeding season. They breed around the age of 2 or 3 and build their nests in tall trees near the edge of the wood to allow easy access. An ideal habitat for Red Kites would be rural countryside, with woodlands, farmland, open spaces and country lanes. They nest in March / April and usually lay 1 – 4 eggs which hatch after about 30 days. Both parents help rear the chicks, the female protects it from predators, while the male can travel several kilometres to find food.

Young chicks are covered in sandy white feathers when they first hatch, brown feathers begin to emerge after 2 – 3 weeks. At 4 – 5 weeks old the babies are fully fledged and can tear food for themselves. At 8 weeks old they take their first flight and at 10 weeks old they are self sufficient. At signs of danger a mother signals the juvenile who will then “play dead” to the extent a fox will believe them to be dead and will subsequently leave them alone.

Some regular casualties we see at Tiggywinkles include:

Red Kites often ‘swoop’ down to eat road kill and are sometimes too slow in flying away  as a consequence they get hit by a car or another vehicle.

Red Kites have a tendency to fly into power lines or barbed wire fences so feathers may be missing/broken/bent or burnt. Missing feathers will grow fairly quickly but broken or bent feathers will affect the birds hunting capability so these birds would need treatment and repair work until their next annual moult. Burnt feathers can be plucked under anaesthetic.

We would not release a Red Kite if it had lost an eye or if it had impaired vision as this would affect its ability to to hunt, so in these circumstances the bird would stay with us permanently.

Birds of prey cannot cope on one leg as the pressure on the remaining leg is too great and can lead to bumblefoot, a bacterial infection.