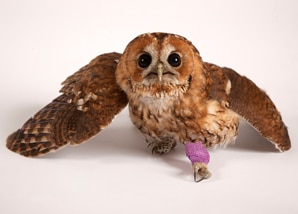 The talons and beak of any owl can cause formidable injuries, so when handling any of the species it is imperative that strong leather gloves are worn. Grip the owl around its shoulders and do not allow it to flap its wings. Place it in a strong cardboard box with an old towel inside, close the box securely and seek expert advice.

What do owls eat?

Owls need complete animals as food, including the bone and fur which are regurgitated as pellets. They will hunt small mammals, birds and (particularly the little owl) insects. Never give an owl bird seed, bread, milk or any alcohol, in fact it is best not to even offer them water unless you are very experienced in their care.

Should I put up nest boxes?

It is possible to put up a tawny owl nest box in a large tree in the hope of attracting a wild pair. Similarly, a barn owl box in an old barn may attract these ‘white’ owls, but they are rare these days.

Owls and the Law

All owls are fully protected - that is to say, it is illegal to remove or damage its nest or eggs or to kill, injure or take one from the wild. Only if the bird is found disabled can it be picked up.

All are listed as Least Concern.

Strictly carnivorous and rarely drinking, the five British species exist by hunting, on silent wings, small mammals, birds and (particularly the little owl) insects. They have large forward-facing eyes, but mainly use their obliquely-placed ears to locate their prey, which is swallowed whole. The long and short ‘ears’ of the Asio species are simply feather tufts.

The Little Owl is our smallest species reaching just 23cm in height.

Barn Owls are the most visible at night, with their white feathers on their face and underside, and pale brown speckled back. They grow to around 35cm.

The Tawny Owl is the most commonly seen and heard owl, with dark brown feathers with dark and light barring across their bodies. Their tu-whit tu-whoo calls between two owls can be heard across Europe. They can grow to around 39cm.

Short-eared Owls grow to around 39cm.

Long-eared Owls have long visible feather tufts on their head, but these are not actually ears. They grow to around 37cm.

Little Owls can be found across England, Wales and southern Scotland, and can be spotted during the day perching in a tree or telegraph pole, or when hunting at night and dawn.

Tawny Owls are nocturnal and prefer woodland, and with their dark colouring they can be hard to spot.

Short-eared Owls breed mainly in the north of England and across Scotland, but are found further south in the winter months. They prefer coastal marshes and wetlands.

Long-eared Owls are nocturnal and very secretive, so are rarely seen. They can be found across the UK, although are only summer visitors to northern Scotland.

Little Owls will lay 3 to 5 eggs in May, and after a 28 day incubation, the chicks will be reared by both parents. They will fledge (start flying) around 26 days old.

Barn Owls will lay 4 to 7 eggs over a few days, but the eggs will hatch a few days apart, as they are incubated once the first egg is laid. The youngest won’t survive if food is scarce. They will fledge at around 55 days.

Tawny Owls tend to use the same nest sites each year. They lay 4 to 6 eggs, which are incubated by the female from when the first egg is laid. The eggs hatch around 32 days after laying and the young chicks will stay in the nest for a long time, between 60 to 80 days.

Short-eared Owls are ground nesting birds and will lay 4 to 8 eggs in the reed beds. The young chicks will leave the nest around two weeks and will be flying around 24 to 27 days.

Long-eared Owls tend to nest in other birds abandoned nests. They lay around 3 to 6 eggs, which hatch after 27 days. The young will leave the nest between 18 and 25 days and fledge about a week later.

We are constantly being brought young owls that are believed to be orphaned. Being of an adventurous nature, they often venture out of their nests only to find that they cannot climb back up. Watch from a discreet distance to see if the parents return before deciding a bird is orphaned. If at all possible return the youngster to the nest, but always beware of the adult birds as they can inflict serious injury. If you do find a real orphan it will need to be hand reared. This is a very specialised job, so you should take it to your nearest wildlife rescue centre. Never be tempted to take an owl home and tame it. This is cruel and also illegal. They are quite unsuitable as pets as they can be dangerous.

We see a lot of wing injuries, along with leg fractures – generally the cause is unknown, as we rarely get a history with our patients. Our specialist veterinary team are experienced in repairing fractures and resetting bones.

We see a number of owls with head injuries caused by collisions, normally by vehicles. These head trauma cases can be stabilised with treatment.

Occasionally we get birds of all sizes which have fallen down a chimney. Apart from being a bit sooty, they may have scrapes to their wings as they struggled to free themselves.