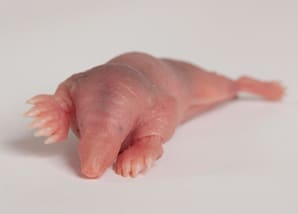 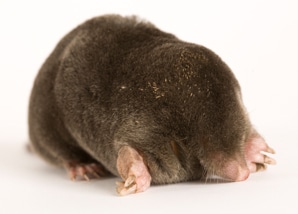 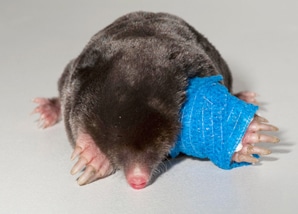 Moles have a tremendous bite and sharp claws, so an injured mole should only be handled with very thick gardening gloves and put into a strong box.

What do I do about a resident mole?

Molehills are thrown up only once, when the mole first moves in. As this soil is crumbly and weed-free it can easily be removed and used as a top dressing or sterile potting compost, saving some more of the gardening budget. Leave your resident mole alone and soon you will not even know he is there. If you get rid of the mole, you will find a new mole will move into the territory and throw up new mole hills as they dig new tunnels.

If you see a mole above ground he will not readily see you, for his eyesight is very poor. He will, however, pick up the slightest vibration caused by your footsteps and will disappear into solid ground in less than a minute. For his size, he is one of the world’s most powerful animals. Never try to put a mole head first down its hole; instead, turn it round and it will disappear backwards into its tunnel, albeit biting you as it goes.

European moles are found in the UK and across Europe. They are related to shrew-moles, desmans and other small insectivores. Our moles are one of nine species of mole, found primarily in Europe and western Asia.

Least Concern. Population is stable. They are considered pests by some and have very little protection by law.

European or Common Moles have a fat, long body covered in dark grey or black velvet like fur, which can lie in either direction – making moving through the tunnels easier. Their eyes are very small and hard to spot in the fur and they have no external ears. They have long very sensitive whiskers, which are used to hunt for food. The large spade-like front feet are turned out to make effective digging tools.

Moles are completely subterranean animals. They are insectivores and feed on wireworms, leatherjackets, cut-worms, insect grubs and earthworms. Its saliva contains toxins which paralyze earthworms.

They prefer to live in deciduous woodland, farmland or grassland, where there is an abundance of food. Conifer forests have soil which is too acidic for worms and consequently is not suitable for moles to survive. They are fiercely territorial and a resident mole will never allow another to share its territory. This mole lives in an underground tunnel system, which it constantly extends. It uses these tunnels to hunt its prey. Under normal conditions the displaced earth is pushed to the surface, resulting in the characteristic molehills.

The female mole would have been mated by an incursive mole, between March and May. About four weeks later, in an extra-large nest lined with dead leaves, called a fortress, she will give birth to up to six red hairless babies, called pups.

At five weeks old they are completely self-sufficient and are driven from their home territory by their mother. For a while they live above ground until they find a vacant lot where they can excavate their own tunnel system. It is during the time above ground that they often fall prey to owls, rats, weasels, stoats and foxes, while badgers will readily dig them out of the ground.

Rarely above ground, the most common injuries are wounds from garden forks or spades or puncture wounds from predatory animals catching either the young who are searching for a new territory or those who have been fast enough to catch an adult just as they break the surface from digging a new tunnel. An injured mole is likely to drag itself back underground if it can.