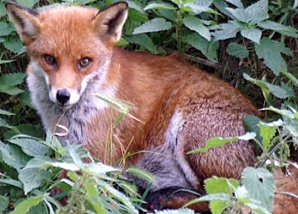 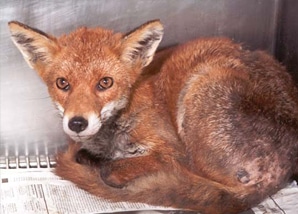 Foxes should only ever be handled by experienced personnel. They can bite when cornered, which is exactly what you need to do in order to rescue them (please observe from a distance). Once you have established that a fox is in need of assistance, contact your local wildlife rescue centre or telephone Tiggywinkles on our emergency helpline 01844 292292.

There is a fox limping in my garden, what should I do?

This would depend on how mobile it is. Limping is a sign of problems, but doesn’t often stop them from being too agile to catch! We all suffer from strains now and again and animals are no exception, so a limp for a few days may just be that and could improve with time. However, if the limp persists or the animal’s condition deteriorates, then it will need medical help. Catching a mobile animal can be very difficult and should only be tackled by trained wildlife rescuers to prevent injuries to yourself and the animal. You may be able to help by putting food for the animal near and then into a shed or garage for a few days to get the animal used to being in that area. Then call your nearest wildlife hospital for advice.

Advanced mange will need to be referred to a wildlife centre, so they can trap and treat the affected fox.

How many young do foxes have and when do they leave the parents?

Usually foxes will have between 2 and 6 cubs. Generally foxes leave the parents at around 5 months old.

A member of the Canidae family which includes domestic dogs, wolves, jackals, coyotes and many other lesser known extant and extinct dog-like mammals.

Least Concern. The Red Fox has the widest geographical range of any member of the carnivora. They are adaptable and opportunists omnivores and are capable of successfully occupying urban areas.

The Red Fox weighs between 5 and 10 kilograms, although these larger weights tend only to occur in Scottish Foxes. In England and Wales vixens average about 5.4 kilograms and males about 6.7 kilograms, barely larger than a domestic cat. They are instantly recognisable with their dog like habits. Most of us know the British Red Fox by its coat which is sandy, red-brown or russet on top and pale underneath, complemented by black legs and ears and often, but not always a white tag to its tail. Some have darker fur and some an almost black underside. In the wild, foxes can live for up to 10 years, but most foxes only live for 18 months to 3 years due to hunting, road accidents and diseases.

Found across Europe, North America and Asia living at heights of up to 4,000 metres or more. It has colonised parts of North Africa and the whole of Europe including, of course, the British Isles where in can be found in both towns and countryside alike. They live in family groups in a den.

Baby Foxes are called cubs and are usually born around March. Usually foxes have between two and six cubs who leave their parents at around 5 months old.

Foxes are omnivores. Their diet is largely made up of invertebrates, for example, insects, worms and snails. They also eat small mammals, reptiles (such as snakes), amphibians, grasses, berries, fruit, fish, birds, eggs and dung beetles. Most species of fox generally consume around 1 kg of food every day. Foxes cache excess food, burying it for later consumption, usually under leaves or soil.

Some of the common casualties we see at Tiggywinkles include:

Foxes can contract mange which is caused by mites that burrow into the skin, causing skin sores and fur loss. The fox may appear with dry or crusted skin and as the animal will not be able to hunt or sleep well, it may be very weak and close to death when found.

Foxes are often injured by being hit by a car or another vehicle. The animal needs to be treated for shock and the injuries sustained quickly if it is to survive.

Sometimes foxes get themselves trapped in fencing and even if they have only been trapped for a short time, serious wounds can develop up to seven days later. If foxes are trapped for any length of time the wounds may also become infected. Do not release foxes caught in fencing, call a wildlife rescue, see our Animal Emergency page for help.