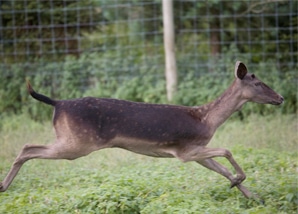 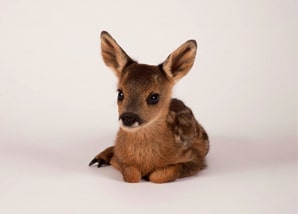 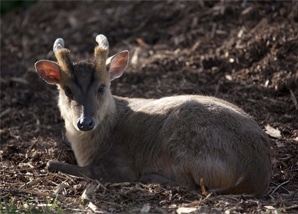 Out of the six species of deer living wild in the UK, only the Red deer and Roe deer are originally native to this country. The other British species are introduced, with the Fallow deer brought to this country by the Normans and three Asiatic species, Reeve's Muntjac, Chinese Water deer and Sika deer, originally introduced in the 19th and early 20th centuries

I have found a baby deer in the woods on its own, should I bring it to you?

No, the mum will leave her babies hidden in grass during the day while she looks for food. She will return periodically to check on the baby. Please make sure you don’t touch it or disturb it, so as not to scare away mum. The parent won’t come back while you are around, so it would be best to leave it alone. Always observe from a safe distance for at least 12 hours before assuming a fawn has been abandoned. Of course if the little one is injured, then it should be taken to the nearest wildlife hospital for treatment.

I’ve just seen a deer hit by a car and it has run off into a field, what should I do?

Without getting too close, observe the deer to see where it goes, if it doesn’t go far and you can still see what it is doing, call your nearest wildlife hospital immediately for advice (if you are local call Tiggywinkles, or try directory enquiries for a wildlife rescue centre). If it disappears and you can no longer find it, then a rescuer probably won’t be able to find it either, so your observation is vital.

Chinese Water Deer are listed as Vulnerable, as their population is decreasing.

The other five species of deer are listed as Least Concern.

Deer are herbivores and are ruminants (they have a four-chambered stomach), so they can digest their vegetation diet.

An adult male (buck) Fallow deer stands about 95cm at the shoulder and may weigh up to 80kg. Their coats can vary in colouring, from a pale brown with white spots, to almost entirely dark browny-black. They are active during the day and night, but are more likely to visit busy open spaces at night. Males and females live in single sex herds in woodland areas, although mixed groups are often seen in more open areas.

The Roe buck (male) stands 75cm at the shoulder, weighing up to 25kg. They have a reddish brown coat, which may be paler in the winter. The males will develop short antlers with up to three points. They are generally solitary through much of the year, but may live in small herds during winter months.

Muntjac deer are the smallest of the British deer. They are stocky and a rich brown colouring. They have two dark stripes down their face and visible glands below the eyes. A Muntjac may reach a height of 50cm at the shoulder and weigh around 16kg. The males will develop short, usually single point antlers. They are generally solitary, or occasionally seen in pairs. The males have well defended territories.

Chinese Water deer are slightly large than Muntjac, standing around 55cm at the shoulder and can weigh around 18kg. They have light brown fur and quite round ears, giving a teddy bear like appearance. The adult males have tusks instead of antlers. Generally solitary except during breeding, the males are particularly aggressive towards each other.

Sika deer are originally from Japan and are known as the spotted deer, as they keep their spotted coats into adulthood. Their colouring can vary from light to a very dark brown, with white spots and a paler belly and legs. The males can be up to 100cm at the shoulder, weighing up to 70kg.

The Red Deer male (stag) is the largest of all the British deer and can be up to 135cm at the shoulder and weigh up to 190kg. They have a reddish brown coat and the stags will have impressive antlers. The antlers alone can weigh up to 5kg on the biggest deer.

The females of all species of deer are slightly smaller than the males and do not have antlers. With the exception of Chinese Water deer, all male deer have antlers which start growing in the spring and are shed each year.

Fallow deer are the most widespread and can be found across England and Wales and some parts of Scotland. They prefer mature woodland or open agricultural land.

Roe deer can be seen across England, Scotland and in some parts of Wales. They prefer woodland and forests, but will be seen on open ground in higher population densities.

Muntjac deer prefer forest with dense undergrowth, but will also be seen in mature gardens and scrub land. They are mainly found in south and central England and Wales with a small population in the north of England/Scottish border.

Chinese Water deer are only really found around Bedfordshire, Cambridgeshire and Norfolk. They prefer to be near rivers and waterways and can be seen in woodlands, fields and reed beds. Our British population makes up around 10% of the World population of these deer.

Sika deer prefer forest or dense woodlands, with patchy clearings, plus heathland. They can be found across the whole of Scotland and parts of Northern Ireland, but they are only found in the north and south of England.

Red deer are perfectly adapted to woodland and open moors, and are found in Scotland, the Lake District, East Anglia and the South West of England.

During breeding season, the males will take part in 'rutting', usually late Summer to Autumn. During rutting, the males will compete by fighting for the prize of mating with the females, these battles can inflict serious injuries if neither male backs down. The males will be very aggressive at this time of year, not just with other deer, so are best avoided. Muntjac deer have no exact season for rutting or breeding and continue to have young throughout the year.

All species of deer leave their young alone hiding in the grass, for long periods of time whilst the mother goes away to feed. It is very important to observe the animal, from a safe distance, before assuming a fawn has been abandoned.

Orphaned deer that need to be hand reared must be taken to a wildlife rescue centre, tame deer (particularly the males) can be very dangerous and should never be kept as pets.

Chinese Water deer and Roe deer can give birth to more than one fawn.

Hit by a car

Any deer that has been hit by a car should be covered with a blanket until an experienced handler arrives. The head should be covered to reduce stress. Do not try to drag the animal off the road, as this can cause extreme agony for the deer and further injuries. Deer can also be very dangerous.  Contact your nearest wildlife rescue centre for assistance.

These deer are in need of medical attention. However, deer with only one leg damaged are still extremely difficult to catch as they can run very fast and even jump fences.

In this case this could indicate a spinal or pelvic injury.  The deer must be carried on a stretcher or board to prevent further damage, when transporting to the hospital. Our veterinary team are very experienced in dealing with deer injuries and can successfully tackle some of the most serious injuries we see. We have a specially set up deer hoist to keep the deer off the injuries during recuperation.

Trapped in a fence

Even if a deer has no obvious wounds when first freed from a fence, it must not be released straight away. It can take up to a week for a condition called ‘pressure necrosis’ to develop, at which time the skin will begin to die away, and open wounds will appear.

Attacked by a dog

A deer that has been attacked by a dog is likely to be badly wounded and in shock, it will need medical assistance immediately. Wounds will also become very badly infected.

Any injured orphan must have medical assistance and will need long term hand rearing.