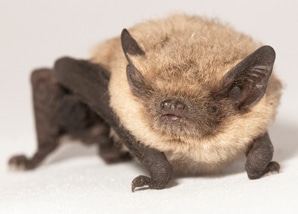 Bats are mammals in the order Chiroptera. There are 18 species of bat found in Britain, of which 17 are known to breed in the UK. All are insectivores and are strictly nocturnal, their daylight hours are spent grooming and sleeping, emerging from their roosting sites at dusk each night. They are also one of the three taxa of British mammals that use hibernation to survive the cold harsh winters.

Bats must only be handled if they are injured or in any obvious difficulty, for example, clinging to walls away from a normal roost site - they would not normally be exposed in the daytime. Place the bat into a box with quilted kitchen towel on which it can hang, together with a hot water bottle wrapped in a towel for direct heat. Try to pick them up without touching them by placing a box over the top and carefully slide a piece of card underneath. Some species of Bat have proven positive for rabies so if you must handle them always wear thick gloves, as they may bite if frightened. Please then get them to the nearest wildlife centre or bat rescue organisation.

We are having building / repair works done and have noticed tiny droppings which we believe could belong to bats, what should we do?

Telephone Natural England on 01733 455000 who will be able to give help and advice as it is illegal to disturb a colony of bats without a licence.

In terms of the most commonly seen Pipistrelle the species is widespread and abundant, and there is no evidence of current significant population decline. Consequently it is assessed as Least Concern. The Brown Long Eared Bat, also commonly seen is endemic to Europe, where it is widespread and common, with no major threats. With regards to other species of Bat further information can be found on the IUCN Redlist website. All bats are covered by the legislation of the Wildlife and Countryside Act 1981 which prohibits anyone from catching or disturbing their roost.

Bats are graceful, complicated creatures and contrary to popular myth are not vampires who get caught in your hair on dark stormy nights!! The wings of bats are much thinner than those of birds, allowing bats to maneuver more quickly and more accurately. Although they have tiny eyes, bats can locate their prey easily through a complex navigation system similar to a ship’s sonar, known as echolocation techniques. The social structure of bats varies, with some bats leading solitary lives and others living in caves colonized by more than a million bats. A single bat can live over 20 years.

Flight has enabled bats to become one of the most widely distributed groups of mammals, they exist all over the world and are found in almost every habitat available, ranging from seasides to mountains and even deserts. The two most likely visitors to houses are the tiny pipistrelle (being only 35-45mm long) and the long eared bat, identified by their incredibly long ears! They are ususally found roosting in the eaves or tucked behind old wooden beams during the spring and summer months. Bat habitats have two basic requirements: roosts, where they spend the day or hibernate, and places for foraging. Most temperate species additionally need a relatively warm hibernation shelter. Bat roosts can be found in hollows, crevices, foliage, and even human-made structures.

Bats may have one to three litters in a season, depending on the species and on environmental conditions, such as the availability of food and roost sites. Females generally have one offspring at a time, which could be a result of the mother's need to fly to feed while pregnant. Female bats nurse their young until they are nearly adult size, because a young bat cannot forage on its own until its wings are fully developed.

Bats are bought into Tiggywinkles, often as the victims of cat attacks and like all other animals need an antibiotic injection as soon as possible in order for them to survive.