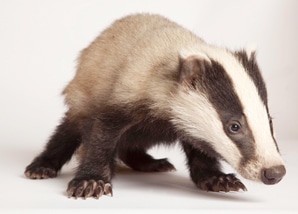 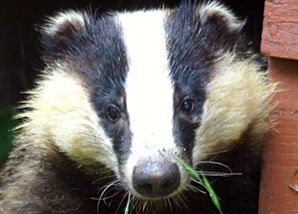 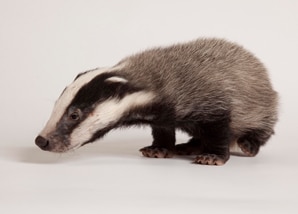 Badgers should only ever be handled by experienced personnel. They are very dangerous animals who are incredibly strong and quick, even when injured. Once you have established that a badger is in need of assistance, contact your local wildlife rescue centre or telephone Tiggywinkles on our emergency helpline 01844 292292.

I have found an injured badger on the road, what should I do?

Contact your nearest wildlife rescue centre for assistance, never try and pick it up yourself as they can inflict a nasty bite. Keep an eye on it from a distance, in case it moves away from where you initially saw it. Make sure you keep yourself safe on the road.

There is a badger set in my garden and the badgers are damaging everything, what can I do?

Badgers and their setts are protected under law so you cannot interfere with the sett. Just enjoy having such lovely creatures close by as most people never get to see them alive.

A member of the weasel family (Mustelidae) and is related to stoats, pine martins, polecats, wolverines and otters. There are 11 species of badger across the World.
Badgers and their setts are protected under law so you cannot interfere with the sett. Just enjoy having such lovely creatures close by as most people never get to see them alive.

Least Concern. Badgers have a large, widespread population, and have specific legislation in place to protect them, under the Badgers Act, 1992.

An adult badger usually weighs around 10 kilograms, although some can be much heavier, reaching 15 – 16 kilograms. They can grow up to 90cm in length. Typically mature badgers have a silvery-grey to black body and tail with a paler stomach and dark paws. Although rarely seen, due to their shy, nocturnal behaviour, they are easily identified by their characteristic black and white striped face and white margins to their ears. The badger has powerful front legs and very large claws, perfectly adapted for its life of digging! The average age to which a badger lives is two years (because of the high cub mortality), however if a badger lives past the age of two (of which around 50% do) it may live to seven or eight years of age.

European Badgers are widely distributed across Britain, Ireland and Europe and can also be found in China and Japan. Some badgers inhabit urban areas, especially along the South Coast of the UK, Essex, London, Bath and Bristol. They live in quite large family groups and dig their own home which is called a sett.

Called Cubs, they are usually born around February. A typical litter is 3 babies, but can have one to five. They usually stay underground for the first two or three months.

Badgers are omnivores and feed primarily on earthworms (including caterpillars and moths), they eat small mammals such as voles, rats, mice, young rabbits and occasionally hedgehogs. Fish, frogs, berries, roots, bulbs, nuts, fungi and various plant matter also make up part of their diet. As opportunistic feeders they will also eat carrion and those in urban areas are known to scavenge food from bins and gardens.

Some of the common casualties we see at Tiggywinkles include:

Road Traffic Accidents
An injured badger which has been found on the road side after it has been hit by a car or another vehicle.

Badger with an Injured Leg
Badgers can still be very mobile, even with a fractured leg. Fractures are stabilised using plaster, intramedullary pins or external fixation.

Badger caught in a Snare or Fence
Even if a badger has no obvious wounds from being trapped in a snare or fence we would not release it straight away as it can take up to a week for a condition called ‘pressure necrosis’ to develop, at which time the skin begins to die away and open wounds appear. Do not cut free as the badger may run off. Call a wildlife rescue so that it can be treated. See our Animal Emergency page for advice.