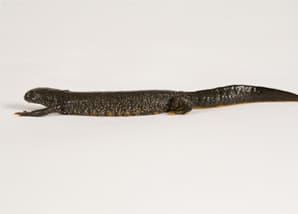 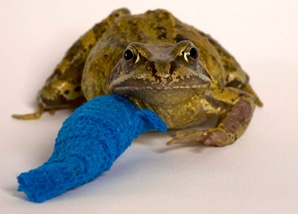 There are three native species of Newt, two native Frogs and two native Toads in the UK. (Plus a few introduced or alien species).

By far the majority of amphibians you are likely to encounter are toads. There will be less of the larger females than the males who are likely to emit a croak when handled. Any toads attempting to cross a road can be easily picked up (wearing rubber gloves) and deposited in a bucket before being safely delivered to the nearest pond - in the direction they were travelling.

Occasionally frogs will cross but they tend to do this in great leaps. They are very tricky to catch and extremely difficult to hold on to but, if you do manage to put some into a deep bucket, they too can be deposited in a suitable pond. Newts can also be seen ambling across the road. Take them to the nearest pond area.

My pond has frozen, what should I do?

If your pond freezes over, there is always the possibility that any frogs that are at the bottom may die. This risk can be reduced by floating a football on the surface of the pond during the winter, if the water freezes the football will leave a hole in the ice allowing oxygen through. Alternatively, if it is too late and the water has already frozen, sink a bucket of hot water through the ice to create the necessary hole.

Do not break any ice as this can injure fish or frogs.

All current listed as Least Concern, but Great Crested Newt, British Pool Frog, Common Toad and Natterjack Toad are all listed as priority species under the UK Biodoversity Action Plan.

Palmate Newts are yellow to olive brown, with dark freckling and the males may be darker with two lines along the back. The belly is pale yellow or orange and may have a few brown spots. The throat is white or pink and not usually spotty. They have a dark stripe across each eye. The smallest of our native newts, they will only reach 7-11 cm.

Palmate and Smooth Newts look very similar. Smooth Newts are a little larger, 8-11 cm in length. Male smooth newts have a more obvious wavy crest on their back during the breeding season and have a rounder body. The most consistent difference is that they are more likely to have a speckled throat.

The Great Crested Newt is  much larger at 15-18 cm (the females are larger than the males). They are dark brown or black in colour with warty skin and a white dots along the side of the head and body. Their belly is dark yellow or orange with black spots and the throat is pale with dark spots. The males will develop a pronounced dorsal crest during the breeding season.

Newts should be seen as terrestrial rather than aquatic animals.

The Common Frog is variable in colour, but often yellow-brown although can be more olive green and some individuals have a more yellow colouring. Can be spotted or striped. They have a dark colour behind the eye and barring on the back legs. Can be 6-9 cm in length.

The Pool Frog is mainly brown in colour with dark spots and a marked light-coloured dorsal stripe, with occasionally some green around the head. They are relatively small at 6-9cm in length and have recently been reintroduced to East Anglia.

Common Toad is best known for its warty skin. Like the Natterjack toad, it has bulges on the back of its head and will walk rather than jump. It has a horizontal slit pupil with a yellowy-brown iris. They are brown or greenish grey in colour, with a light, spotty belly. They can grow around 8 to 13 cm with the females bring larger than the males.

The Natterjack Toad has distinct bulges on the back of the head with a horizontal slit pupil. They are covered in warts which may be bright yellow or red. They have a yellow stripe along their back and are generally greenish brown in colour. The males grow up to 7 cm and females up to 8 cm. They are covered by Government legislation and should not be handled.

Palmate Newts and Smooth Newts can be found in garden ponds during the spring and early summer.  They will spend late summer close to their pond, in leaf litter, long grass and under stones. They come out to feed after dark on worms and small invertebrates as they prepare for the winter ahead.

Great Crested Newts prefer deep ponds with lots of water plants. They live in the ponds from March to August and then spend a couple of months in the garden in the lead up to winter. They can range quite far from their ponds and can be found in gardens, ditches and woodland.

Common Frogs and Toads love gardens and can be seen most often between late February to October. They often breed in garden ponds between February and March and this is the best time to see them, sub adult frogs may stay around for the summer, but the adult frogs can range much farther away and can be found in gardens, fields or near areas of standing water. Toads may stay around the garden all summer, spending the days in the flower beds and coming out at night on warm evenings to feed on slugs and earthworms.

The Pool Frog can only now be found in a few areas of East Anglia.

The Natterjack is extremely rare in the UK and can be found almost exclusively in sandy places, such as coastal dunes and lowland heaths. In Cumbria and Scotland populations are also thriving on saltmarshes and moorland.

Both the Palmate and Smooth Newts lay their eggs individually on aquatic plants, wrapping each egg in a leaf. It is impossible to distinguish the eggs of the Palmate Newt from those of the Smooth Newt in the field.

The Great Crested Newt lays around 300 eggs in the late Spring, which are much larger than other native newts. Like the other newts, they are laid individually on aquatic plant leaves.

Both common frogs and toads will spawn (lay their eggs) between March and April, although frogs may spawn as early as February, however if they are laid too early there is a risk of late frost, freezing the spawn and killing the eggs. The females will leave the pond after spawning leaving the male to call for further mates. The two types of spawn are easy to distinguish, in the case of frogs the thousands of eggs are laid in clumps, whereas toads lay their eggs in strings.

Natterjack toads breed from March to May. They lay a string of eggs similar to the Common Toad, but the Natterjack’s string contains a single row of eggs.

Adults newts remain in the pond until July, the young newts or "efts" leave the pond during August/September.

The eggs of both frogs and toads should hatch into tadpoles after about two weeks. Frog tadpoles are predated upon by dragonfly larvae, adult newts, grass snakes, herons, blackbirds and robins, however the toad tadpoles taste bad, so they do not suffer the same fate.

The tadpoles will spend the next few months eating algae and decaying material found in the pond. However, new or poorly planted ponds may be poor in nutrients and provide little food for the growing tadpoles, this may lead to slower growth and later emergence of the tadpoles or in very poor areas high mortality rates. In these circumstances the youngsters can be helped by providing fish flakes, floated onto the pond in small quantities.

Once the tadpoles have grown legs and lost their tails, they will begin to leave their pond and move to new areas. Toadlets are seen in abundance from May to July, with froglets taking up to three months to take on the appearance of tiny frogs. At this time it is crucial that they can easily climb out of the pond. Both species will find it very difficult to negotiate the steep sides of ponds and without help may drown at the side of the water. This can even be a problem for older animals, particularly toads who may need extra help to leave water. Gently sloping sides are easier to negotiate for all animals needing to get out of the pond, or ramps can be fitted to allow easy access.

Drains
Toads sometimes fall down rainwater drains when they cross the road.  If you can find something to carefully lift the grill, a child’s fishing net could be used to retrieve the toad, and wear a pair of rubber gloves to handle it.

RTA
We regularly treat amphibian casualties. If you come across an injured toad or frog please transport it to the Hospital, we shall be more than willing to do what we can to save its life and return it to the wild.

Catted
We do regularly see injuries caused by cats, which result in puncture wounds, limb injuries, skin tears and a major infection.

Garden Injuries
The number of garden injuries can be limited simply by walking the area to be mowed or strimmed to check for animals hiding in the long grass. We regularly see injured limbs or puncture wounds caused by machinery or garden forks.

Red Leg
A common infection found in frogs is ‘Red Leg’, caused by the bacteria Aeromonas hydrophila. The name red leg comes from the lesions found on the hind legs and underneath of the frog giving the legs a red appearance. This infection is highly contagious among frogs and will kill all the frogs in a pond. All affected frogs should be taken to your nearest wildlife rescue centre as soon as possible. Clearing and emptying the pond can provide some protection. It is important not to just move the amphibians to another pond, as the infection could spread.

It comes as a surprise to most people to find out that amphibians can be rehabilitated just like other animals, fractured limbs can be fixed and skin tears sutured, so all injured amphibians should be taken to your nearest wildlife rescue centre or phone us for advice on 01844 292292.